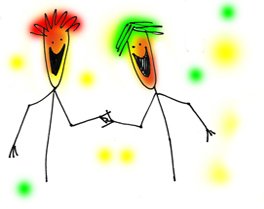 As an artist and entrepreneur, risk and change has become an integral part of my life. I used to fight it, but now? Open arms.

Without the challenges offered by going through big changes and daring adventures, I’d never have developed the capacity for courage and acceptance that I have.

I used to be achingly shy. I hardly talked to anyone when I was at school as a kid, and later as an adult, it would take me months to make new friends. But somehow, after I left my kids’ dad, I started doing stuff I never ever thought in my entire life that I’d do.

For instance, in 1986, I went on walkabout, taking off for 2 years in my truck, traveling all over the western states and parts of Canada.

I drove almost all the roads of northern California and southern Oregon, camped on every river I could find, and never stayed in one place any longer than a few days.

When I used regular state campgrounds, other travelers would notice I was alone. They constantly asked me, “Aren’t you afraid?”

My first response was, “Of what?”

If there was anything to be afraid of, it was a fellow human being with mal-intent. But the truth was, I never, ever met anyone like that. Really.

And yet, although those things did happen, I got through them just fine. More than just fine, actually – I met some of the kindest, most giving human beings I’ve ever had the good fortune to encounter.

When the rear axle on the trailer I was using to tow a ton of carving stone broke down, showering bright sparks all over the road, I was in between towns on the main route through Nevada, literally 90 miles to any town. And it was midnight – it had been too hot to drive during the day, so I’d decided to drive as far into the night as I could.

Good thing I did, too, because if I’d been driving by day, I’d never have seen the sparks from the metal of the worn axle flying into the air and onto the middle of the road. The trailer would have thrown the wheel, and a horrid accident could have occurred.

After assessing the damage and seeing there was no way I could jury rig it to work until I got to Ely, I decided I’d stand to the side of the road and wave for help when cars came by.

But they didn’t. It was an hour before one semi came by – blasted by, I should say – and another before one more did the same. No cars. No pickups. The big rigs just completely ignored my waves and shouts.

It was a brilliant night with a fat, shiny moon, and the wrinkled, crusty desert terrain was dappled silver and deep ebony shadow where the sage managed to grab hold in the saline sand. The air was crisp but not too cold – it was beautiful.

So I pulled down the rear panel of my truck to sit on and wait for another vehicle. I had begun to doze off a bit when I just happened to open my eyes a slit, and saw headlights coming in the distance.

I jumped out of the truck and ran right into the middle of the road, waving and jumping up and down. I was NOT going to let anyone get by me this time.

The old grizzly semi driver was livid – I’d slowed his timing down. But I convinced him to give me a ride into Ely, and off we went. He didn’t say a word until we got there.

As I started to climb down to the road, he turned to me and said, “Girlie, you’re fricking NUTS to go running out in front of me like that! How’d you know I’d stop?”

I said, “I trusted you.” He got a funny look on his face, and told me the only reason he’d stopped was because his own daughter would have done “the same stupid” thing, and then she would have scolded him up and down if he hadn’t stopped.

And that he’d been livid – not for slowing him down – but because he couldn’t stand the thought of me stuck there on the side of the road all night.

See what I mean? Even though he’d seemed surly and grumpy and  mad at me, he wasn’t. He was afraid FOR me.

People are intrinsically good, I believe. And if I hadn’t had the guts to go running out there, I’d never have met him – or the wonderful gas station attendant who helped me resolve the axle problem in less than a day.

And if I hadn’t gone walkabout, I’d never have developed the courage to trust people for how good they really are.

What are YOU afraid of? Go meet it, give it love and heart and courage. And see how much better you like yourself afterwards.