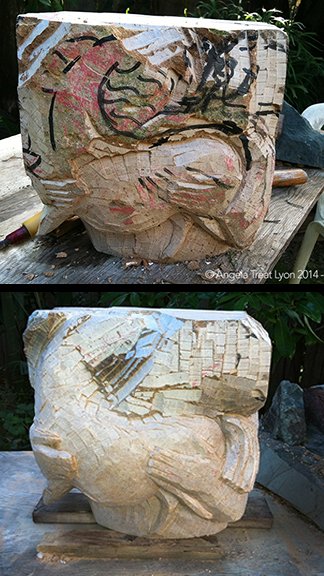 Yesterday, I talked about Radical Courage, and told you how I had a mishap in the middle of nowhere in the dead of night, and came out OK – simply because I had the guts to run out in the road in front of a semi truck.

But I didn’t say why radical courage is a trait you find in most artists.

It has to be, simply because of the nature of the game – we take raw materials and create a SOMEthing right out of nothing in particular.

White paper or canvas becomes an amazing scene or a palette of bright or moody color; pieces of what normally would be called rubbish is transformed into an emotional or political statement. A rock becomes a horse, or a man, or a woman giving birth.

It takes guts to stand in front of a sheet of blank white paper and put that first mark on it.

It takes guts to cut into that hunk of stone – once you cut that piece off, it’s gone! And even if you glue it back on, it ain’t ever gonna look the same.

And then! To watch the slowly progressing piece emerge, change, get modified beyond your original vision – courage! Be still my heart!

Sometimes it gets so intense I can’t go on any further in one day, and have to leave off.

But always the next day when I come back to it, I’m OK again, and I can see what to do next.

Even if you’re not an artist, it takes courage to live, and to live artfully, to create in your own specific way.

What do you have to call your courage up for?