From POTS to STONE

I was a potter for almost 20 years. I started out making homely little functional stoneware pots: cups and vases and bowls and such.

After a few years I could see that in order to be viable in the Real World I either had to make mass production ware or make unique pots that were so nice I could get incredible prices for them. 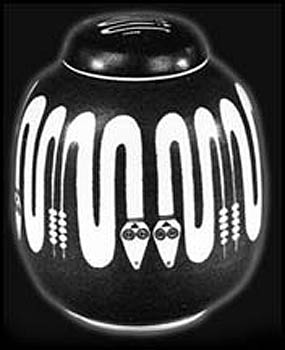 Not being a mass-production kinda gal at the time, I chose unique studio pottery. Much more fun.

I ended up with a beautiful line of thin, very high-fired porcelain bowls, jars and vases you could see light through, and that were decorated in a very tight, bold style no-one has yet to figure how I did.

The secret was in two parts: the under-glaze stain, and the glaze itself.

Maybe one day I’ll reveal my secrets – in the meantime it’s fun to hear, “Angela, I still can’t figure out how you got those clear lines, and that matte clear glaze – especially firing at 3000 degrees!” 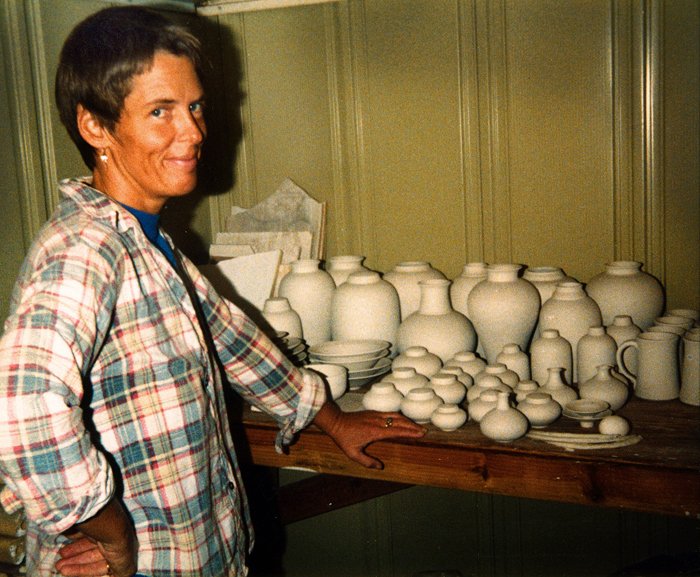 I loved making pots. Getting my hands into the clay and creating something out of it was awesome. Like magic.

I still dream of going back to making pots one day. I could get good and slippery and dirty all I wanted and still produce a LOT of somethings of beauty and value.

And did I love to fire the kiln? Glorious. Love affair material. 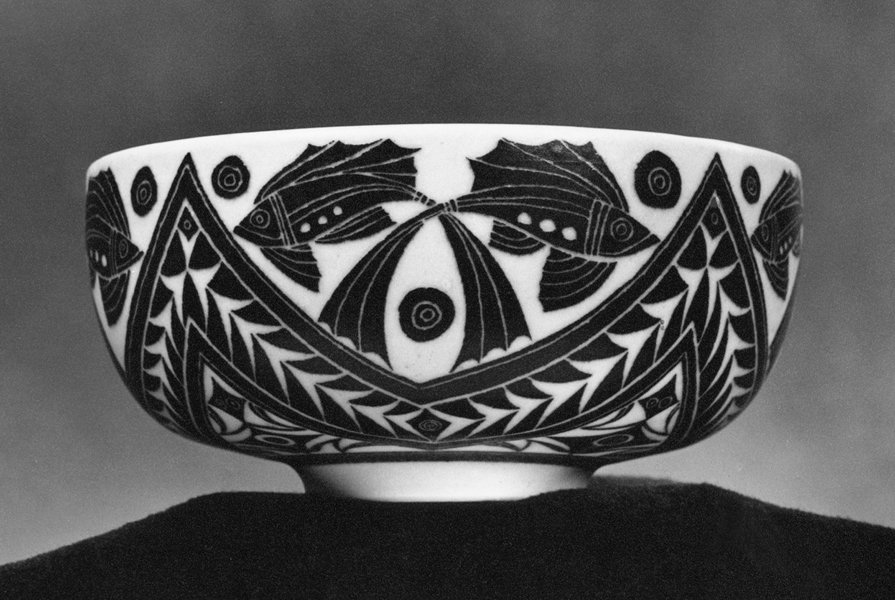 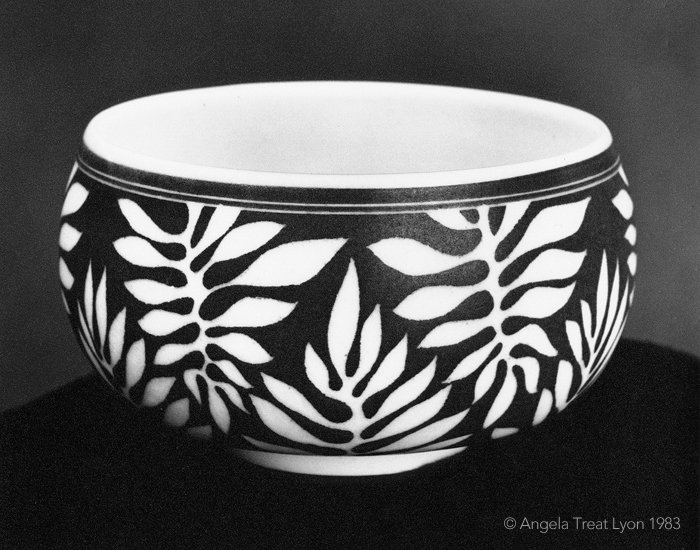 I designed and built a fantastic kiln – the guys who helped me build it and I called it Orgo-Max – it practically burst with energy as I fired it – and it never had one single cold spot in it.

Orgo-Max was a four-foot square cube with front and back burners on alternate sides, with a top updraft vent. Firewalls up four bricks on either side to keep the flames off the pots. It never gave me a bad firing.

I was sorry to dismantle it when I decided to move back to Hawaii and focus on carving stone. I still remember it with love.

Then, disaster struck: I was in a very bad car wreck in December, 1981. Someone ran a red light, hit the back of my car, and when my car spun around on the slick street, the front of it hit yet another car. Nothing like being slammed on both sides!

The first doc I went to said I wouldn’t walk again. I fired him. I fired the next three, as well. How was I supposed to continue my life without being able to walk? With two very lively little boys? Right!

A friend turned me on to a chiropractor who just happened to live and work right down my own street. I had to be driven there the first few times, but within a very short period he had me not only walking but out of pain. Let’s hear it for the Palmer method! 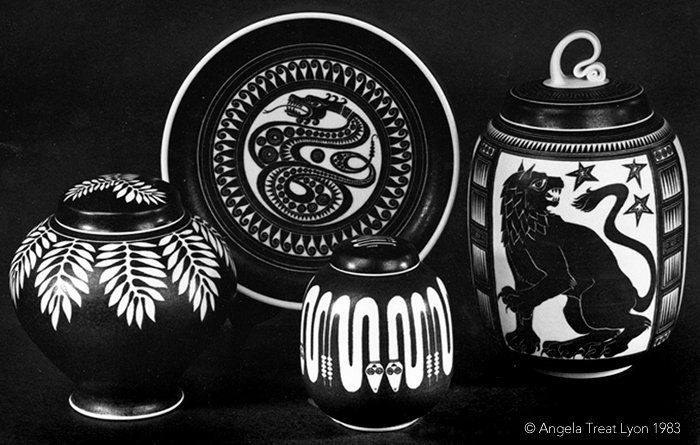 Earlier that year, I had a huge show of my pots in San Francisco. After that, I went to visit my friend Richard Hotchkiss, who took me to see a friend of his who turned soapstone and alabaster on a lathe to make bowls. 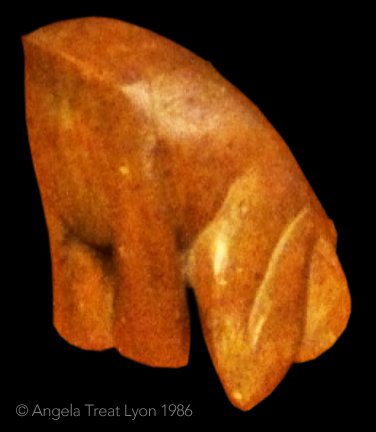 He gave me a piece of soapstone. I sat right down on the tailgate of my truck, got out my pocketknife and carved it into a little oddly-shaped frog.

I was hooked! Carving the little froggie had turned me ON!

I thought: ahh! – no more bending over fragile pots scraping intricate designs in under-glazes (got that? A tiny part of The Secret has Been Revealed!).

I determined right then and there to quit pots and only do carving. I tried to stay with pots as a smooth-transition thing, but my heart just wasn’t in it.

Maybe that’s why I had the car wreck – the Universe was saying, Angela! Wake up! Give up the pots a’ready and get on with the carving!

Everyone said I should never give up making pots. But I couldn’t help it – I only wanted to carve! Why make pots to carve on when I could just carve without having to make pots at all?? All I could think of was stone and what I was going to do with it! So I slowly sold off all my pottery tools, clays, glaze materials and equipment – even the kilns (I had two). 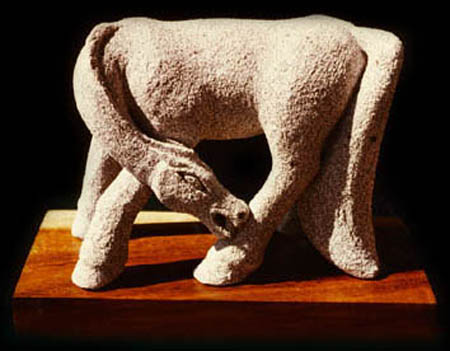 Ash Horse – Made out of Ash from Mt. St. Helens sold

As I continued to learn about stone, I wanted to finish off the remainder of the glaze materials I had on hand.  I still had a small electric kiln that I had used for bisque firings.

So I made up batch after batch of strange goo that I poured into milk cartons. I removed the final, dried blocks and carved them.

Some of them fell apart at the first touch. Some cracked two days later into a million pieces. Some made it through a firing, but then fell apart. 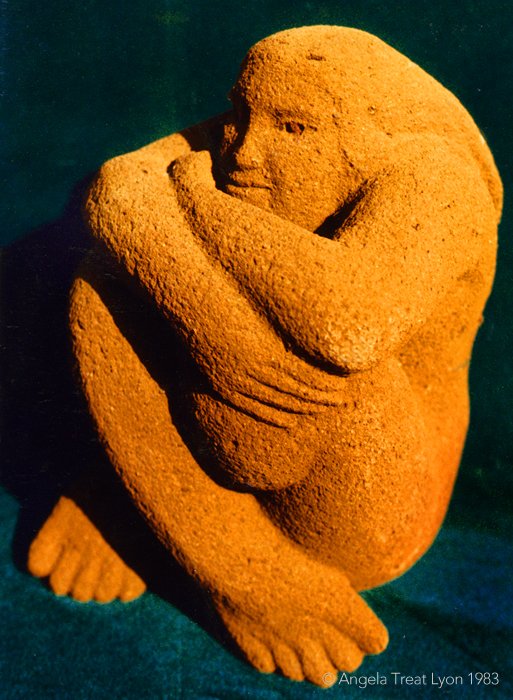 I eventually got a mix down that was part glaze materials, Mt. St. Helen’s ash, garden sand and – since I was back again in my beloved Hawaii – some crushed lava rock, like I used in the making of Contemplation.

When I first started shifting from making pots to carving in-the-round, I had a lot of difficulty thinking in 3-d.

I had been so accustomed to thinking in terms of bas relief that it took a while to get so 3-d was easy.

I used up my remaining clay making some coil-built sculptures, like Ben – he was a little guy I saw one night out of the corner of my eye crouching up on the top of my outdoor stairs – when I looked again – he was gone. 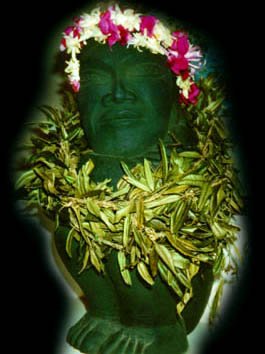 Ben now lives on Kauai. His humans give him orchid, pikaki and maile leis from time to time – and he gives them good luck!

Below to the right is Wanda – she was one of those pieces I never got to live with for long since she was bought up so fast.

She was also coil-built. I started at the base of the piece, and slowly built up coils of clay, shaping and giving them texture with a little paddle of wood I’d made.

When I got all the way to the top of the piece, her head just kinda flopped and flattened out. At first I was upset, but then later it looked OK – well, so she’s a little strange, so what? 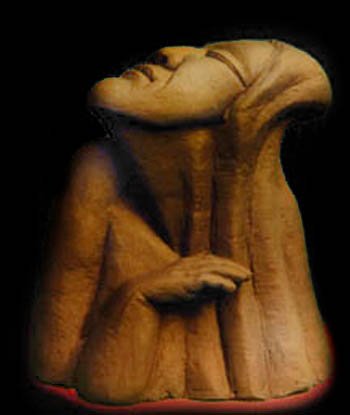 Wanda – stoneware clay – this is the original before it was fired – it is now black. sold

I experimented with cement, too. I had a friend who makes model airplanes.

When I complained how heavy these concrete pieces I made were, he suggested that I add micro-balloons to the mix.

Micro-balloons??? What the heck are they?

Micro-balloons look like a fine white powder. Kind of squeaky if you smush them between your fingers.

Putty is so heavy that it’ll throw the plane out of balance. But micro-balloons are so light that you can use them as a filler without upsetting the balance of the plane.

Since I like to try weird stuff, I mixed it into my cement mixes – along with sand and garden dirt for interesting texture. 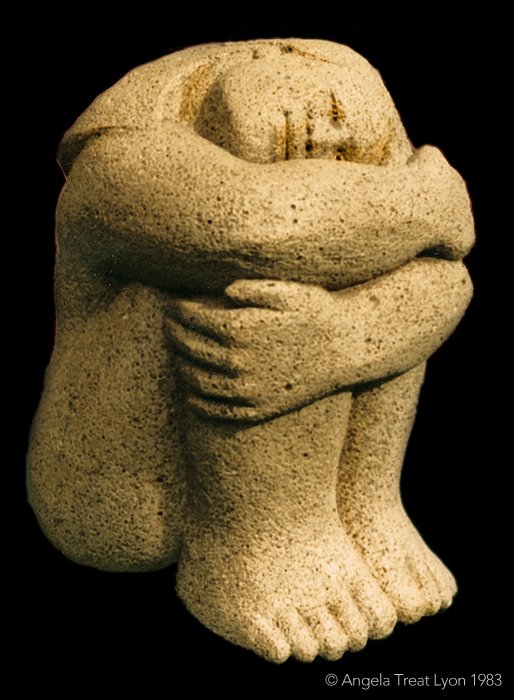 Peace was made out of cement, micro-balloons, Mt. St. Helen’s ash (the last of it!), garden dirt and sand.

She is much lighter than regular concrete would be, but still very durable. I stained and sealed her, too.

I liked her so much I decided to cast her as a bronze. Click here to see Peace in bronze.

Before I made any bronzes, I tried playing around with wax and clay.

I love to carve wax, but using it as a sculpture medium?

Making the originals out of wax – whether carved or built – NOT for me! The wax and I fought and kicked and screamed hollered bloody murder – forget it!

I tried Plasticine, an oily clay a lot of people use to create their originals from because it doesn’t dry out like regular clay. You can work on it for ages and it still maintains its plasicity.

Yet with this clay, too, I ended up feeling the same. Why? As a carving medium, wax is fantastic. But wax and clay are used traditionally in an additive process – you build with it, rather than taking material away as in stone or wood carving. Give me a hammer and a bunch of chisels and some stone any day and I’ll be happy as a clam at high tide. 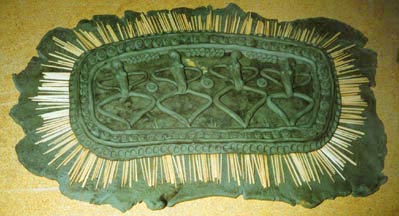 These were some of the very first clay things I tried.

They were fun, but in my ignorance of the casting process, I didn’t know they wouldn’t cast well without a lot of itty-bitty corrections that would take me forver to do.

So even though I loved the idea of making stuff in clay or wax to cast in bronze, I decided to stick with carving stone. Simplicity – that’s what I like best. Give me a pile of soapstone and some good tools, and I’m a happy gal.

These are only a very few of the things I made on the way to stone carving. They were done right about the same time I was making batik paintings, too, after I returned to Hawaii. But that’s another tale….