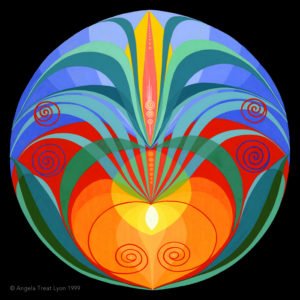 Since ancient times, Mandalas have been used for meditation and healing. In old Tibet, Mandalas were used in the process of training the mind to be quiet, so that That Still Place Within was more easily accessible.

It was said that the Divine lives at the center of the Mandala. With that in mind, the Mandala was used as a focus point for meditation.

As the mind quiets and becomes still, the meditator finds the Divine at the center of his own being.

I read about this use of Mandalas years ago. Later on in my life, when this series of designs came through me, I realized that that was the intent within them: that the Divine would reside at each design’s center.

Research I’ve done indicates that Mandalas are the visual forms of the resonance traces of specific frequencies of sound/light. Some pretty amazing research done by Hans Jenny shows that if sound is transmitted through a thin layer of sand on a metal plate, the sand vibrates in such a manner as to create designs in the sand, the patterns shifting with the sounds transmitted. 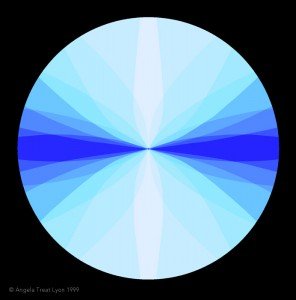 Similarly, through the Principle of Entrainment.

Maybe you’ve seen a roomful of Grandfather clocks whose pendulums all swing together.

This is called entrainment), a Mandala’s energy interacts with the patterns of our electromagnetic frequencies – our resonance patterns – which then align with the optimal vibrational intention of the Mandala at a very deep level.

Thus one can carry or radiate that Mandala’s frequency in one’s own energy field.

These Mandalas are designed to radiate the frequencies of specific intentions. They are the visual forms of the resonance traces of those frequencies – you are actually “seeing” patterns of sound!

Mandalas can be “activated” by using light and sound: by running lights over them, and/or in conjunction with crystals, toning, over-toning or chanting. Many of these Mandalas have been used in cancer centers and retreat centers to help bring about peace, tranquility and healing.

Use Mandalas to add beauty to your home or personal space, as a focus for quiet meditation or contemplation, in a healing process, or combined with sound and/or light in your own sacred process or ritual. They make great gifts for friends and family.

I invite you to get prints of some of my favorite mandalas HERE.