In February 2002, during some of the last months as  Artist-in-Residence in Gore, New Zealand, I was invited to the bi-annual Oamaru Stone Carving Symposium in Oamaru on the eastern coast of the South Island.

See the red dot at the bottom of the map? That’s Gore, and right above it – a 4 hour drive – is Oamaru. In case you’re wondering, the name Oamaru is usually slurred together and is pronounced OH-mar-OO.

I wasn’t used to driving on the ‘wrong’ side of the road – it took me forever to it. I drove the 4 hour trip up there quite nervously, to say the least!  I made it OK, though, and spent 10 days in Oamaru carving and sanding and grinding and chiseling and scraping from 8am to 9pm with 13 other international sculptors. 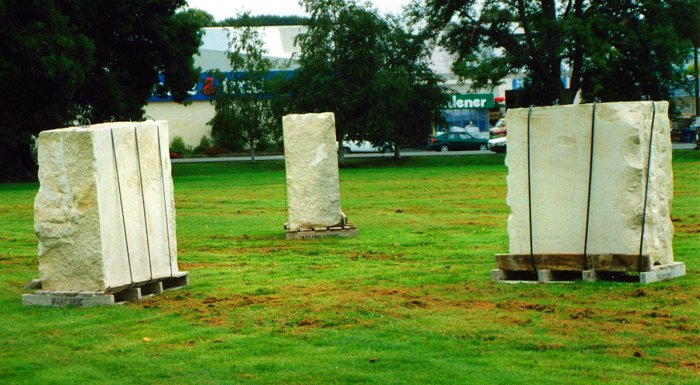 This is what the field in the middle of Oamaru town park looked like before we got to carving – these are the 2-ton hunks of freshly quarried Oamaru Limestone we carved our pieces from. Each of the 14 artists from all over the world got one or two to play with! 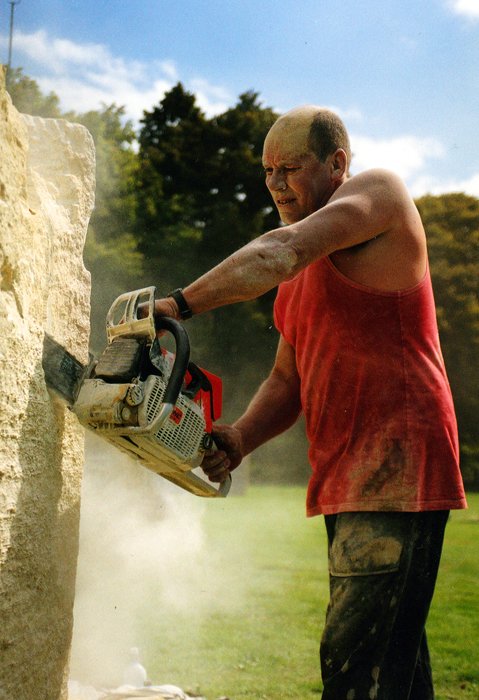 You can see through the trees that there are some stores on the other side of the street facing the park.

One of them was almost a daily hangout for me – the hardware store where I got replacement chisels and grinder parts!

I was lucky – Paul, who worked up at the quarry, helped me cut out a huge chunk of stone that I’d have had to chip-chip out with hammer and chisel to get the big gap I needed.

He saved me about three days of chipping! Thanks, Paul!

There were many and various ways of approaching the stone process. 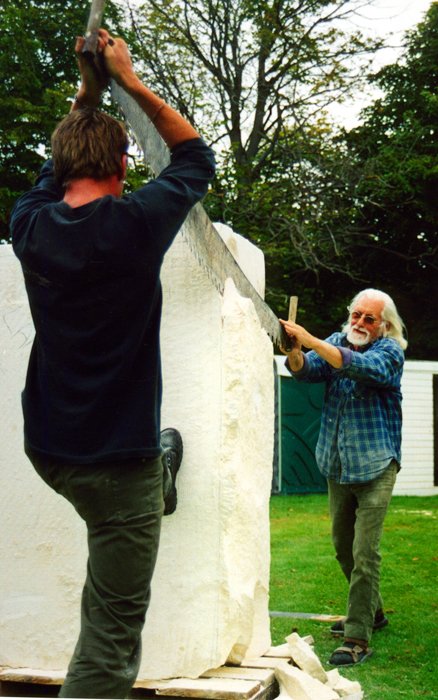 Some used axes, some old-fashioned long saws, some waited until after hours to use power tools, sight-seeing by day.

Most of us stayed at a local campground, with two, three or four in one unit. These were campgrounds like we don’t see here in the US. Rooms!

With communal kitchen and showers, and mini-kitchens in the living-room/2-bedroom units. You could also tent-stay there, but with those units being so inexpensive, who’d want to?

I shared a 2-room unit with Theo (an art teacher and very talented sculptor/painter from NZ whose work is very bold, with strong, clean lines).

It was wonderful to have him as a house-mate – he was an inspiring, talented artist … and he’d sit out on the front playing his guitar and singing every evening.

My other house-mate was Mansour, a Professor of Art who carves graceful abstract sculpture out of many kinds of stone. He came all the way from Egypt.

We all left around 8 a.m. to go carve before the sun hit too hard on us, and to take as much advantage of the time – at 9a.m. we had to stop using our power tools until 5 p.m.

Most of us stayed until 9 or 10p.m., chipping throughout the day and using power to grind or sand until we left for the night. 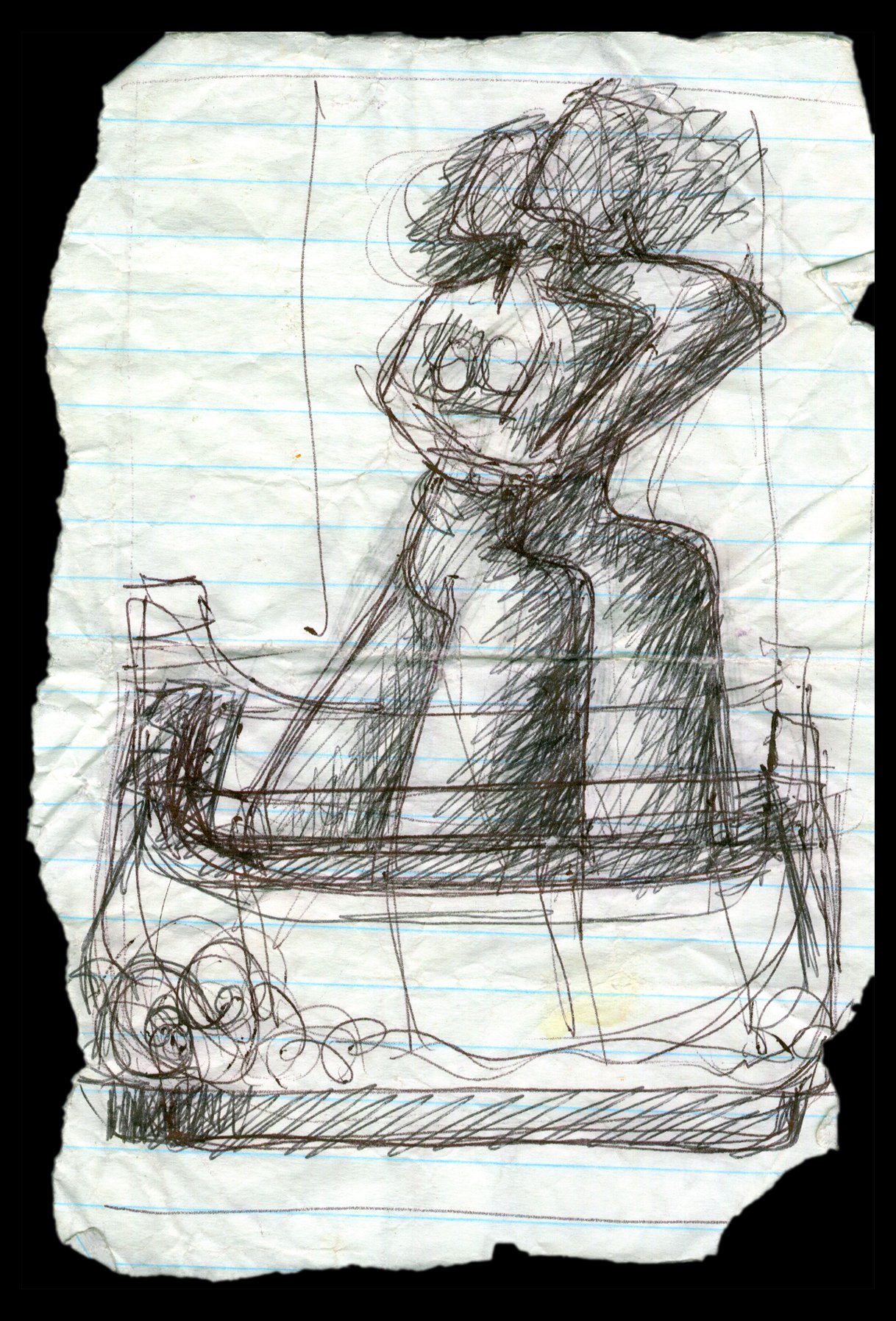 This is the original drawing for my piece. It was on a sheet out of one of those little tiny notebooks you can carry around in a pocket (I keep one with me at all times to jot down ideas). You can see how I started out with the figures only showing from mid-thigh up.

But when I drew the design on the stone itself, I had to adjust for how much more stone here was to occupy. And as I carved, I knocked the tip of the tall prow off – agh! – so it became a shorty stem. Ah well!

We all went about carving in many various ways: some used axes, some chain saws, some old-fashioned saws hand-held by 2 people, some adzes and chisels. 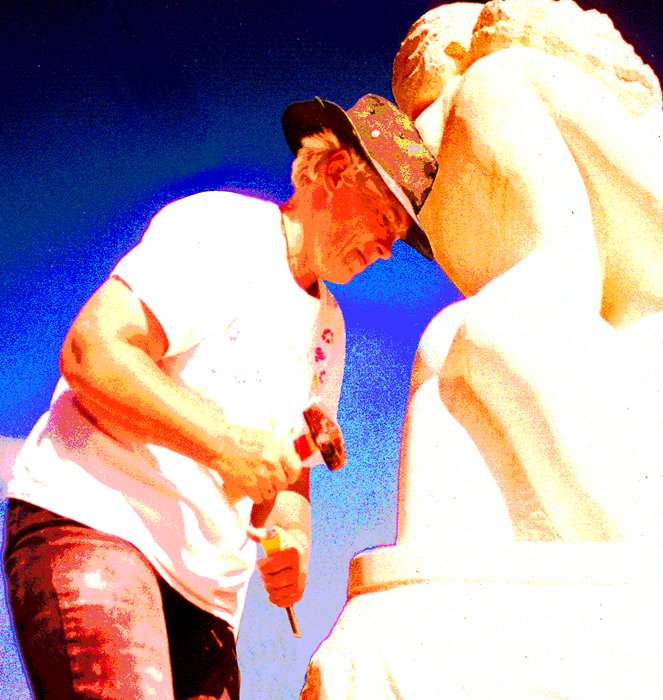 ATL at work at Oamaru Symposium 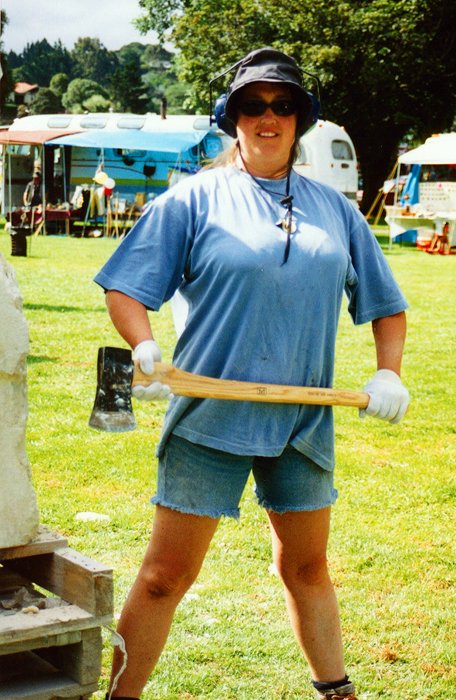 Watch Out for Rosie!

Sam used an ax to rough our his big fish 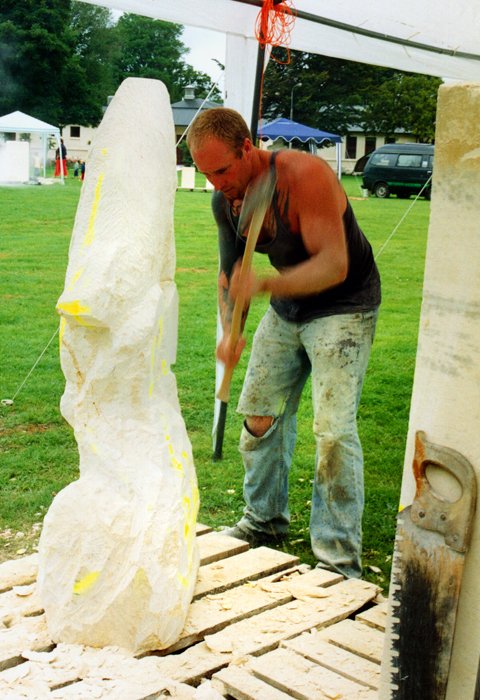 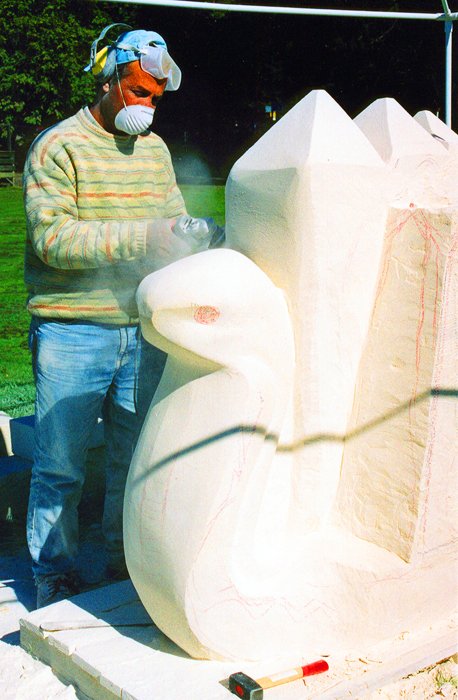 Jay used an enormous flat chisel to start with – at interesting angles and a propensity for elevated environs…. 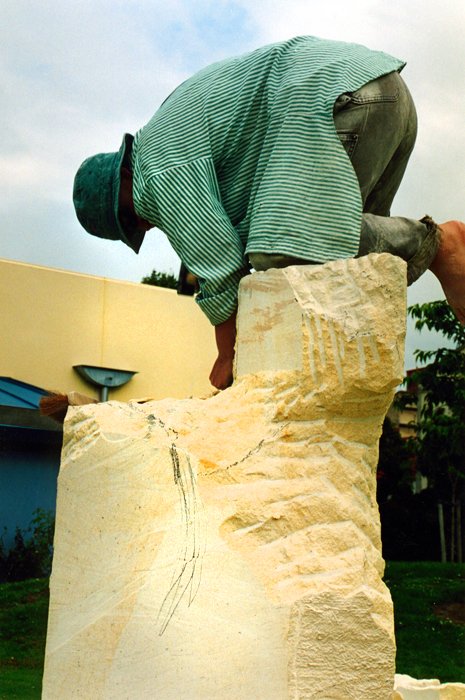 Chris hung out with files and rifflers forever 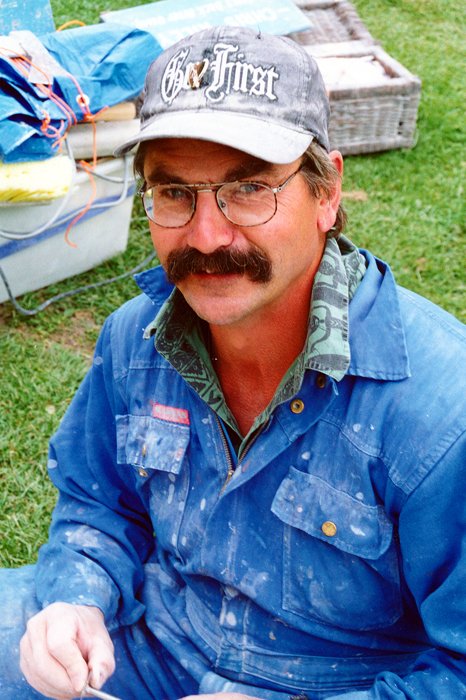 Theo was the Rasp Wizard on all his pieces 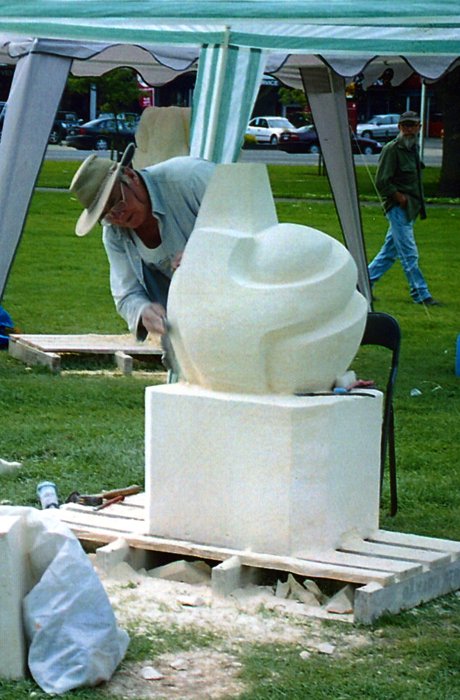 This is how pooped we were at day’s end 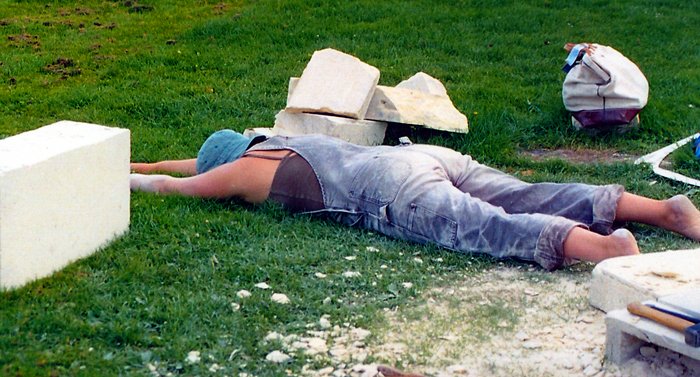 Quite a few very prim and proper little-old-ladies came up to my sculpture, put their conservative little hands on the rear ends of the figures. Was I surprised? Ohhh yes! 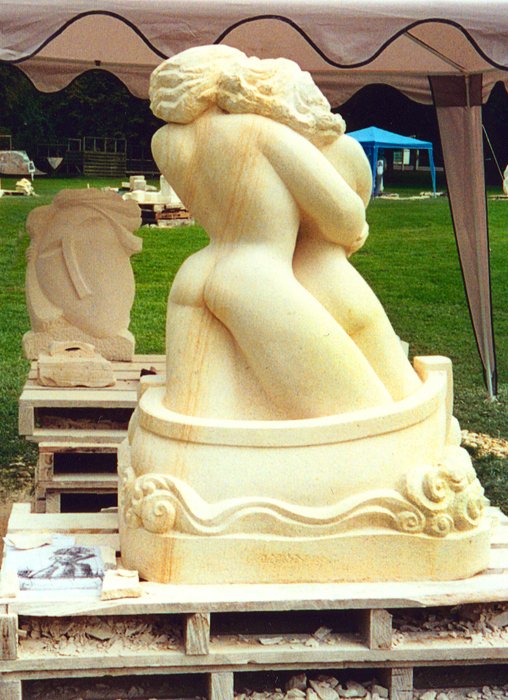 With said hand on said butt, they would then turn to their accompanying husband or girl-friend, lean over as if in some great conspiracy, and say, “Oh! Nice!” – and then, very pleased with themselves, with a wicked gleam in their eyes, walk away – arm-in-arm with their li’l old hubby or snickering with their girl-friends!

Many spectators came around to see what we were doing day and night, so we made lots of friends and had a great time with both locals and tourists.

I didn’t know if I’d be able to finish my 2-ton piece by the end of the two-week period. But it turned out I had lots of time, so I carved two other much smaller pieces out of some of the scraps from the first.

The Truth Behind the Moon and Winner

One was a bas relief-ish kind of thing of a horse’s head I named Winner – it was flat on the back – and an in-the-round called The Truth Behind the Moon. They were both about 30 to 36″ tall and 20 to 24″ wide.

Why the colors? By the time I started those smaller pieces, I was practically stone-blind from the glare off the white stone. So I had a little fun and painted them with acrylic paint thinned down to a wash.

Very unusual for NZ, and I was amazed and pleased to see them received very well! And they both sold at the auction at the end of the symposium.

La Balanza, the big piece I did, is still in Oamaru – somehow it just wouldn’t fit in my suitcases on my return trip! 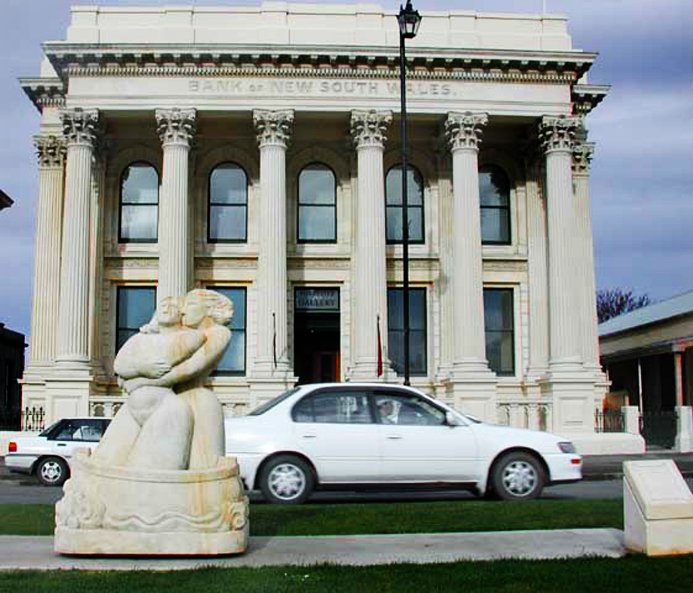 La Balanza out in the city

Now it’s been moved to a new home – if you’re in Oamaru sometime and want to see the sculpture, go to Parkside Quarries and ask Linda to show it to you. (Parkside Stone & Garden , 37 Airedale Road, Weston, Oamaru)

Oamaru is the place famous for its Blue Penguins; and just south of Oamaru is a little beach-side town on Moeraki Bay. On the beach are some pretty awesome round boulders, the origination of which varies with tradition – the Maoris say this, and the scientists/geologists say that!

These are the famous boulders. You can see how big they are!

This was an article in the local rag during our first week in Mt. Somers.

The Oamaru Symposium was terrific – I loved being able to spend 2 weeks with fellow carvers. I was also really fortunate to be invited to the Mt. Somers Stone Symposium, as well! 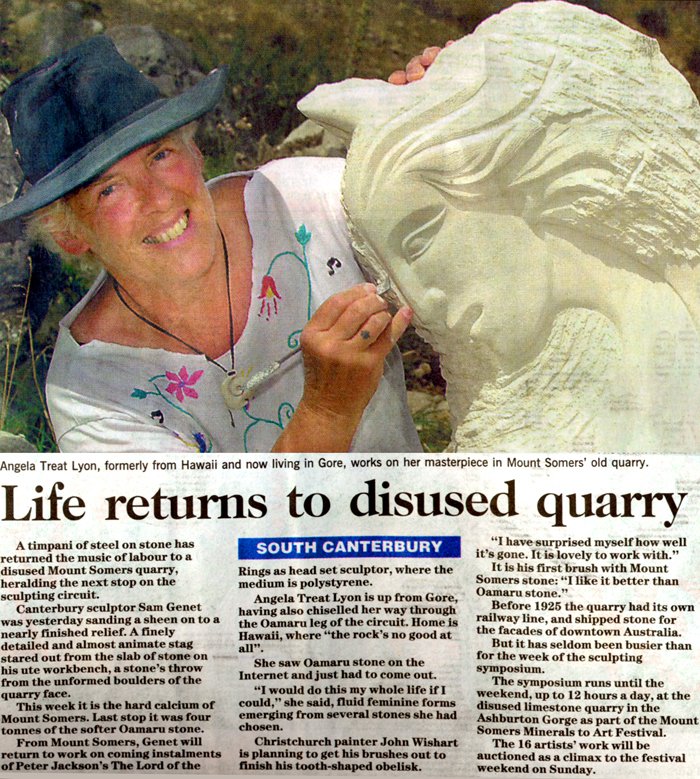 Some of the people who had been carving at Oamaru came up, too. It was a good bunch of really talented folks. Here’s the sculpture in the article: Woman in the Moon…. 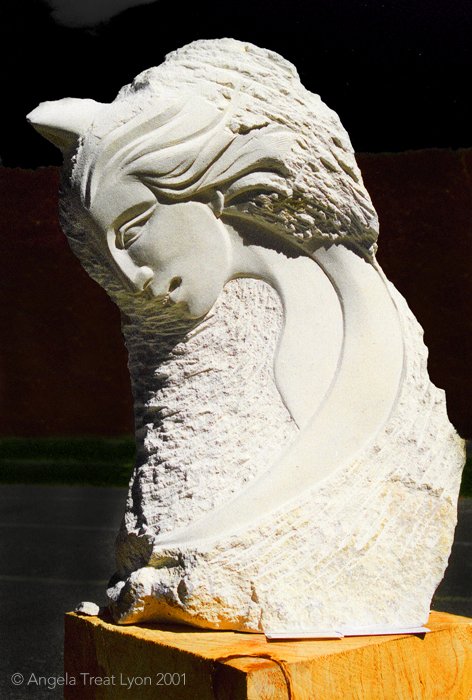 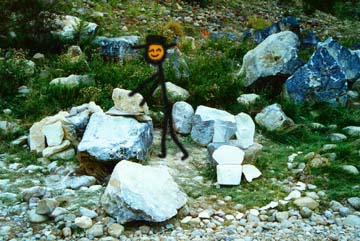 My spot at the Mount Somers Symposium

And this was my Spot – where I worked on the hillside at the Mt. Somers Symposium. Just pretend the little stick figure is me!

There was stone lying everywhere, but you have to be careful not to pick a “dead” one.

If it rings when you strike it, it has no cracks and the internal composition hasn’t gotten water-rot.

If it goes ‘thunk’ when you strike it, it is most likely “dead,” meaning the internal crystalline structure of the stone has broken down, and eventually it will end up a big pile of stone dust!

This is where our stone came from: Oamaru Stone Quarry – thanks for being such good guys! Parkside Stone & Garden , 37 Airedale Road, Weston, Oamaru, New Zealand