.
…in the Land of Ammaze, there was a Tribe of People. They lived in a Very Big Cave on the banks of a Very Big River that emptied out into the nearby Very Big Ocean. 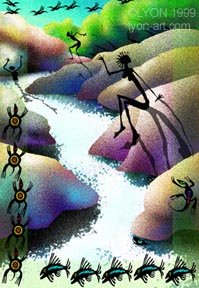 The Cave, as they called it, was very spacious.

Not the Medicine Keeper, the Strong Man, the Hunting Woman, nor the Storyteller – but then, he was over a hundred turns old and wouldn’t want to try such a silly thing, anyway.

The People, as they called themselves, lived a happy life. 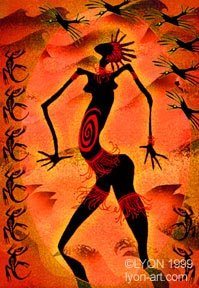 They hunted and played and laughed and sang; they planted, cultivated, harvested, enjoyed bright summers and stored plenty of food for the long cold winter.

They had games and contests and tale-tellings, and gatherings with neighboring tribes.

They shared and created and traded many beautiful objects and skills. In short, they prospered in a full and abundant fashion. 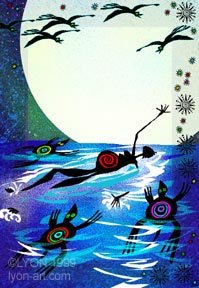 What was really wonderful about them was that, even though there were so many of them living in the Cave, they all knew each other well.

They loved and respected each other, and held only the best wishes for not only each other, but anyone with whom they came into contact.

When a child was born, it was greeted with song and dance and joyful best wishes for a beautiful, bountiful, generous life.

The new Being was held and loved, taught and guided, and as he grew, was gradually given more and more to do that was more and more refined and important to the Tribe’s survival and ability to thrive.

There were no fights, no arguments, no ill feelings. How can this be, one might ask?

It was that there was always a feeling of loving respect and wanting only the best for the other person, and a deep reverence for the Spirit of All that resides in everyone and all the rest of the world around them. They shared and discussed each others dreams; they worked together harmoniously in singing joy, no matter how tedious or difficult the task.

They took pride in what they did, and were generous with all they had. 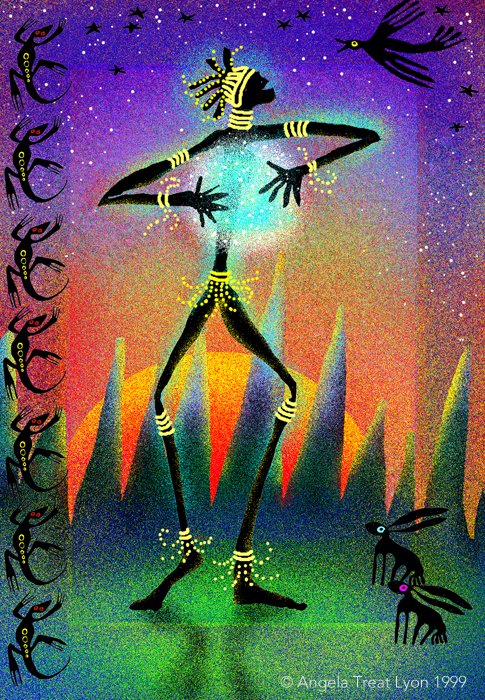 They loved and carefully tended each other and their world with deep reverence and respect.

Questions were patiently answered, always with the end in mind that this Questor only wanted to be and have the highest, widest, most beautiful life possible. No-one was ever lonely, or intruded upon if they wanted alone-time.

Loving, kind, generous help and support on all levels was always there for everyone, be it baby, child, adult or Elder. There was much joy and contentment and satisfaction in their lives, and wherever the People went, they spread their love like fairy dust with every thought, word, act or object they made.

Where is this world now, we might ask. Well, neither it nor the People went anywhere. It’s still there. We can find it in our hearts, every day, all day, all night, all year, our whole lives long.