“In the beginning was the word… or in Sanskrit: “Nada Brahma,” the world is sound…. (from: cymaticsource.com) 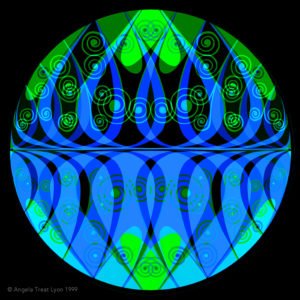 “It is in the work of Dr. Hans Jenny that we can begin to see the relationship of form and sound in the physical world.

Jenny’s experiments have shown that sound frequencies have the propensity to call into arrangement random, suspended particles, or to organize emulsions in hydro – dynamic dispersion into orderly, formal, periodic patterns. In other words, sound is an instrument through which temporal frequency patterns can become formal spatial and geometric patterns.”

– From Sacred Geometry by Robert Lawlor.

Dr. Hans Jenny extensively studied the relationship between waveforms and matter, how sound vibrations affect and create physical form. He would send constant pitches into materials such as a droplet of water, and a thin surface covered with licopodium powder, as well as others. When the pitch sounded it would create incredible geometric patterns in the substances. 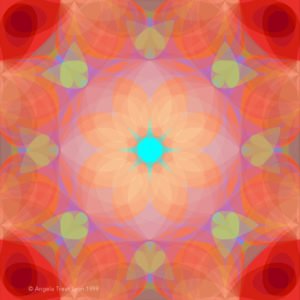 As the pitch went higher in frequency the patterns became more and more complex.

More fascinating still, when two pitches were played simultaneously, the patterns created would pulsate and move like living organisms. Some would look just like blood pulsing through veins, others exactly like spinning galaxies.

These patterns illustrate an underlying order in the physical universe and human consciousness that appears to be intimately related to sound. 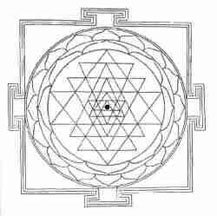 An interesting fact related to Dr. Hans Jenny’s work are the Yantras used in ancient Vedic and Tantric practices. A Yantra is a type of Mandala that corresponds to a particular sound, (Mantra) which in turn relates to a particular energy (symbolized by a deity or aspect of god). When these sounds were put to similar tests as Dr. Hans Jenny’s they were found to create their corresponding Yantra exactly.

One example is that of the sound OM and its corresponding Yantra, the Shri Yantra. Modern biochemists, astrophysicists and yogis all agree that at the molecular level of reality, our bodies are systems of vibrating atomic particles.

Each part of our body, each cell, gland and organ resonate with different frequencies and hence can be said to have its own particular keynote.

In a very real sense then, at the very core of our being, we are composed of sound.

Being composed at our core of vibration it would make sense that the vibrations around us would have impact on us, but how?

Through the principle of resonance and entrainment, two objects containing similar vibrational makeup are said to be in sympathetic vibration, or resonance.

The body as a total system vibrates at a rate of approximately 7.8 to 8 cycles per second when it is most natural and relaxed. The alpha brain waves, which correspond to a state of relaxation, are also in the 8 per cycle range.

The Earth itself vibrates at the same vibrational frequency of 8 cycles per second. The nervous system of each life form is attuned to this fundamental frequency.

As Dr. Jenny discovered in his experiments, as the pitch went higher in frequency the patterns became more and more complex, much in the way that crop formations have grown more complex over the years. 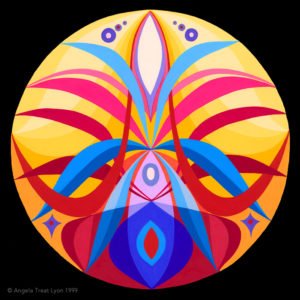 The basis of Yantra operation is something called “shape energy” or “form energy.”

The idea is that every shape emits a very specific frequency and energy pattern.

Examples of old beliefs in shape energy are the Yantras and Mandalas of eastern philosophies, the star of David, the five pointed star (pentagon), the Christian and Celtic crosses, the pyramids and so on.

Certain ‘powers’ are also ascribed to the various shapes.

Basically Yantras are secret keys for establishing resonance with the benefic energies of the macrocosm.

Very often the Yantras can put us in contact with extremely elevated energies and entities, being of invaluable help on the spiritual path. Are the crop circles “Yantras in the fields”? And are they a tool for planetary healing?

Mathematician, Gerald Hawkins, who studied the formations and found a recurring pattern to their design. Hawkins knew that most of the geometric formations were somehow incorporated into a circle.

Though it was occasionally hidden with other images, Hawkins discovered that nearly all crop circles would take simple forms such as the triangle, square and hexagon and put them inside circles. These could certainly represent “sketches” of three-dimensional shapes (see also Paul Vigay’s 3D modeling in Crop Circles: Quest for Truth.)

Hawkins discovered something extraordinary when he took the surface area of the circle and divided it against the area of the square, triangle or hexagon on the inside.The relationships between these numbers are the diatonic ratios, or the actual tones in the octave. In other words…

Behold! A common link between sound, music and geometry.

The importance of this find cannot be underestimated, as this was apparently something that NO ONE had known previously. 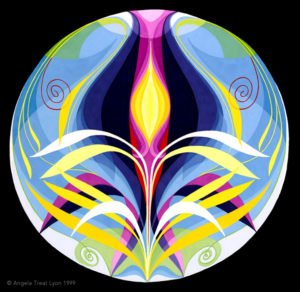 Hawkins astounded everyone by showing a completely new set of “geometric theorems” that the basic square, triangle and hexagon produced musical ratios when placed within circles.

Freddy Silva covers a lot of this material in the book, Secrets in the Fields, published in July 2002.

Cymatics: A Study of Wave Phenomena and Vibration by Hans Jenny.
Synergetics by R. Buckminster Fuller. (Note: Hans Jenny was a student of Fuller’s)
Secrets in the Fields by Freddy Silva.
Sacred Geometry: Philosophy & Practice (Art and Imagination) by Robert Lawlor
Sacred Geometry: Deciphering the Code by Stephen Skinner