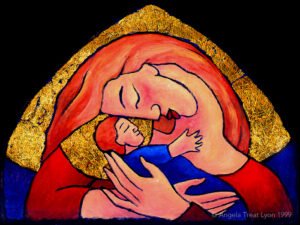 I lived in New Mexico for 10 years. One of the forms of Hispanic art that I found most interesting were their iconic portraits called retablos.

They were painted on wood of Mary, Jesus and Guadalupe. They were almost like the beautiful, glowing icons that came out of Russia for so long.

A friend dropped by one day, and asked me to paint a stylized portrait of her on wood, with antiqueing and gold leaf around the edges. 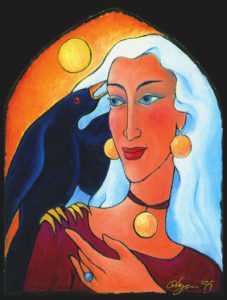 I had been looking at the little pile of old wood out back of the house where I was staying, that I had collected from all over Madrid, Taos, Cerrillos and Tesuque, wondering what to do with it. Instead of carving the wood, I decided to try and paint her portrait on one of them to see how it would come out.

It was wonderful! So after that, because I liked the idea of the warmth of the wooden support, and the depth of color the paint had attained in her portrait, I thought I’d try more. And instead of religious retablos, I decided to paint a series of non-religious, spirit-based images.

Go HERE for all tablitos on this site.

I had to prime the wood so the acids in it wouldn’t yellow the paint eventually, and then I just used a layering technique to slowly apply the colors. Starting with an underdrawing in sienna (rusty brown), I then work up from light and dark yellows to reds to blues. After the painting had dried, I gilded the edges of the wood, which had been cut in a kind of cathedral arch.

At the time, I was living in Tesuque (pron. Tess-OO-kee), an art-rich neighborhood/town (where the wellknown Shidoni Bronze Foundry is) just north of Santa Fe, when I made these. It was an extremely hard time in my life. I had lost my home because my income was so poor, and I was deeply depressed and unhappy.

And it was bloody COLD, too! People seem to think of New Mexico as desert, which should = warm. But nope! Santa Fe itself was at 7000 feet – too cold for my bones!

Being able to paint these gave me a sense of relief and satisfaction in the midst of a long period of deep despair and raging, non-stop emotional turmoil.

Not being inclined to any particular established religion, I chose to create archetypal and allegorical images that express how connected I believe we can and ought to be with our natural surroundings.

I like the feeling of connection between human and animal in these pieces, and how they are powerful yet contemplative in spirit.