The Fire Goddess of Hawai’i

This painting, Pele Searches for Her New Home, tells a little-talked-about part of the legend of Pele, the Fire Goddess of Hawaii. 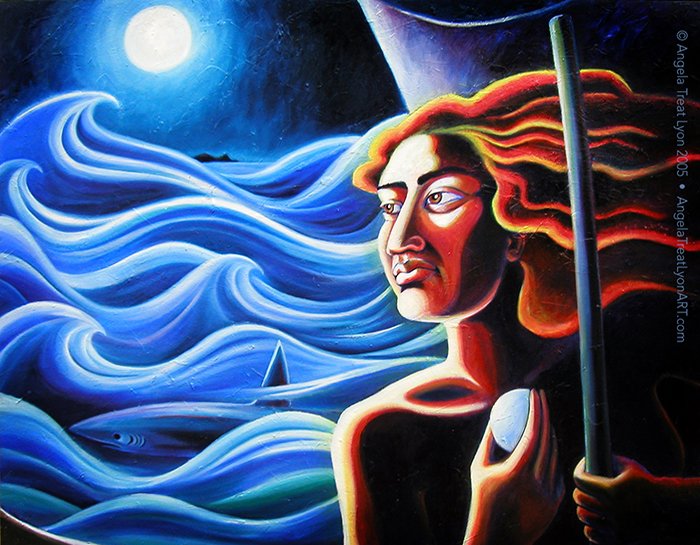 Pele Searches for Her New Home

Most times you see Pele depicted as firey and angry, bursting out of or in a volcano, with lava and fire and bright cinders flying. We think of the wonderful paintings by Master Artist Herb Kane (pron. KAH-nay), with Pele’s beautiful face under the volcano and her hair flowing as lava and fire down the mountainside.

But we seldom hear about her trip to Hawaii, or why she came here in the first place, or with whom or how she traveleld.

I dreamed this painting. Over a series of weeks, various images came to me, which I then painted the next day. Each time, I got closer to the “feel” that seemed Right for this story. The painting started out vertical, and after 7 versions, I suddenly saw it horizontal, so I turned it. Another 2 versions, and Pele was happy – this one feels Right.

I knew I had to paint this in a very simple, powerful and direct manner – this is no nice-nice fairy tale to be told in glossy fancy-terms with decorative swirls and flamboyant extras! So I have portrayed her on her way to the Hawaiian islands, on a search for a new home.

Pele was known to be among the first voyagers from Polynesia to sail to Hawai’i. She was pursued, legends say, by her angry older sister, Namakaokaha’i, because Pele had seduced her husband, a great sorcerer. He could make many miracles, but he could not deliver Pele and sister Hiiaka from the wrath of Namakaokaha’i.

So Pele’s oldest brother, the king of the sharks, Kamohoali’i, gave her a great canoe, Honuaiakea, upon which she departed on her journey far from home, over the wide expanse of the seas, eventually to find Hawaii.

Of all her brothers and sisters, Hi’iaka was Pele’s favorite. Pele, Hi’iaka and another sister, Laka, goddess of hula, were all patronesses of the dance. Hi’iaka was said to have hatched from an egg that Pele kept warm with her own body during the enormously long and dangerous canoe trip to Hawai’i.

You can see the brothers…

The king of the sharks, Kamohoali’i, swims by her side; and if you look closely, you can see the luminescence of the water as the canoe cuts through it in the dark of the night.

Kanehekili (thunder)
Kapohoikahiola (explosions)
Keuaakepo (showers of fire) and
Keoahikamakaua (spears of lava that escape from fissures during eruptions),
…but when you look at her firey hair, you know they are there behind her.

When Pele got to the island of Kaua’i, she used her Pa’oa, or o’o (long stick), to strike deep in the earth. But all the way from afar in her previous home, her oldest sister, Namakaokaha’i sent high tides and floods from the seas to flood Pele out of every home she tried to make.

Pele traveled one by one down the chain of islands, always moving south, eventually landing on the Big Island’s Mauna Loa, the tallest mountain on earth when measured from its base at the bottom of the ocean.

Even Namakaokaha’i could not make the ocean’s waves go high enough on Mauna Loa to drown Pele’s fires, so Pele created her home on its slopes and made her brothers welcome.

A cliff on Kilauea Mountain, near Mauna Loa, is sacred to her eldest brother, Kamohoali’i, king of the sharks and the keeper of the gourd that held the water of life, which gave him the power to revive the dead. Out of respect for this brother, to this day, Pele never allows clouds of volcanic steam to touch his cliff.

The story deserves the power

This Archetypal story deserved all the energy and power I could muster. So I used chiefly primary colors – reds, blues, yellows, white, black – very stark and defined. I avoided pretty-pretty and painterliness. I didn’t want to do the usual tourist depiction showing Pele as a goddess, or just showing her beauty, because I wanted to tell this powerful part of Pele’s Story.

To this day, people say they see Pele, walking along the road or hitch-hiking at night. They see an old, haggard woman, or a beautiful young girl. But in both cases, looking closely reveals her hot red eyes. Be careful not to anger Pele!

I gathered stories from all over. I am most grateful for the story told by Betty Fullard-Leo (PELE, Goddess of Fire); and from the authoritative story of the coming of Pele to Hawaii, published in the Hoku-o-ka-Pakipika (Star of the Pacific), in the story of Aukele-nui-aiku, in 1861, and in another Hawaiian paper, Ke Kuokoa in 1864, and again in 1865.