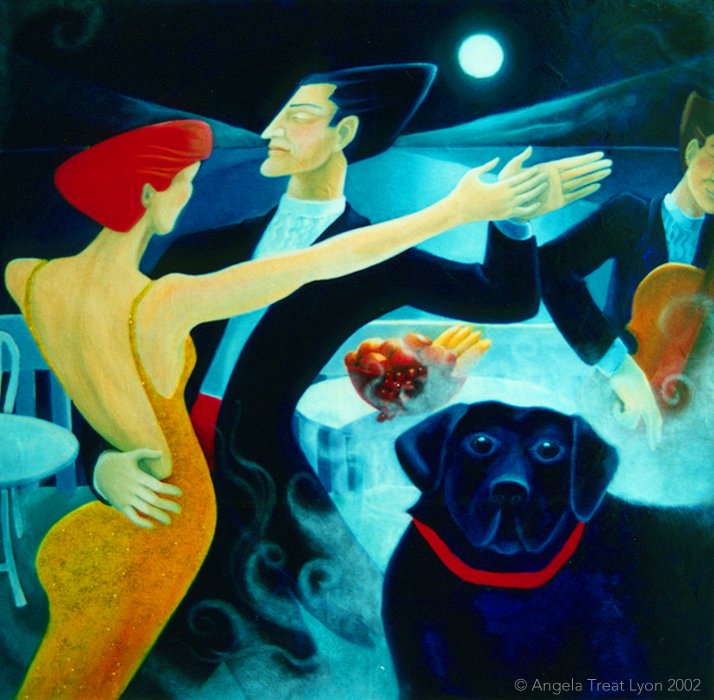 in the late 90s, I was living in Cerrillos, New Mexico, and had a friend named Bin. She was also a stone carver, and had an enormous Newfie/Lab mix dog named Waldo.

The top ridge of Waldo’s back was level with my hip. He loved to lean. If you weren’t careful, he would lean and lean and lean, all the while looking up at you to see if you were noticing, until all of a sudden, you fell over.

Then he’d straggle your neck with his front paws and lick your face, kinda like, “Hey, you came down for lickin’s! Cool! I gotcha covered!” And you were covered – literally – in doggy slime saliva drool. From his grinning chasm of a mouth.

Waldo was very possessive of Bin. Even after knowing them for years, he’d still stand guard until I passed the hold-hand-out-sniff test before entering her house. I thought it was wonderful she had such a devoted friend.

Bin carved the most beautiful angels out of alabaster. They were transparent. I spent many hours at the carving table in her yard.

I miss that companionship – the quiet between us when we visited, the knowing of the stone, and how it would respond to a whack of a hammer or slide of a rasp, the understanding of ‘hey, hand me that little chisel, will ya?’ and knowing exactly which one she meant.

Waldo died the year before I left NM. I was so sad, but you can imagine how Bin felt. I had a dream where Waldo had been liberated, and dreamed of being all suited up in tie and tux, dancing at last with his Bin.